Today, less than two years later, there are 68 people on the payroll, including between 12 and 16 who work regularly from Erie, where the company rents space from the Erie Downtown Development Corp. in the Cashier’s House at 417 State St.

Young, whose company provides information technology services to the government, is open about his goals.

One of those goals is to grow FRC within the next five years into a company with annual sales of between $75 million and $100 million.

It’s a lofty aim for a guy who grew up in Erie, the son of a long-time firefighter and a mother who worked as a Molly Maid.

But after working in Washington for about 20 years – including a lengthy stint with Hewlett-Packard, work in cybersecurity and years in government contracting – Young has spent a long time preparing for this venture.

And based on the company’s growth and progress, it’s a goal that Young says he expects to meet.

“We are absolutely tracking in that direction,” he said. “I would say we are about a third of the way there. It’s exciting to see.”

Having a good relationship with what Young calls the company’s biggest client – the U.S. government – is part of the equation.

Equally important is recruiting and retaining a talented workforce, some of whom are products of Mercyhurst and Gannon universities. Others have relocated to Erie.

When Young talks about the blueprint for a successful company with $100 million in sales, he talks about understanding how to do business with the government and other clients and providing a good value proposition for those clients.

But he also talks about the value of human interactions.

“They (customers) engagements aren’t just with me,” Young said. “If they are talking with someone who is excited to be working for the company, that resonates.”

In short, good health-care benefits, a stipend for living downtown and picking up half the tab for parking should make a growing Federal Resources a more attractive place to work.

And in this case, that helps make Erie more desirable.

Forish knows she’s happy to be paying a $1,000 less a month for a private apartment rather than one she shared with several roommates near Washington.

Kaiser said she and her husband, an architect, have turned the proverbial worst house on the block into a place where she’s proud to live with space to rent to a tenant.

“There is a perception of downtown that people perceive it as unsafe or not an appealing area to live,” she said. “I think that’s kind of changing. I have never felt unsafe living there.”

As he travels the country, Young said, he’s been hearing a lot about Erie and its attempt to rebuild, both through the efforts of the Erie Innovation District, launched by Mercyhurst University, and the EDDC.

Young said he’s excited and encouraged by both of those efforts. More importantly, he said those efforts are already changing the landscape.

As a guy who grew up in Erie, he understands if some are slow to embrace change.

“I can say there have been some false starts on things,” he said. “I always think you are going to have folks who aren’t going to agree or accept change. One thing we have is we tend to get in our way in Erie.”

But Erie’s resilient nature serves as a counterweight to some of those naysaying tendencies.

“If you think about it – the DNA of the people in this town and from this town – it’s a hardworking blue-collar DNA. It’s saying, ‘Hey, obstacles are going to get in my way, and I’m going to get through every one of them.’”

Even before moving FRC to Erie, Young started investing in the city. In 2014, he purchased and restored an aging building behind Junior’s Comedy Club, between State and Peach streets, presently home to Domino’s Pizza.

As the leader of the EDDC, Persinger sees the Federal Resources as a model for others to follow.

“They are doing interesting work, dynamic work under a dynamic leader all around the country. But they are headquartered here in Erie,” Persinger said. “In today’s economy, we have technology that makes it easier to connect with customers all around the globe. It’s an example of where Erie can head.”

It’s a mutually beneficial relationship, Persinger said, one that allows companies like Federal Resources to tap into the local talent pool.

“At the same time, he (Young) has told us he wants to be in the middle of all the activity and the excitement for the future.” 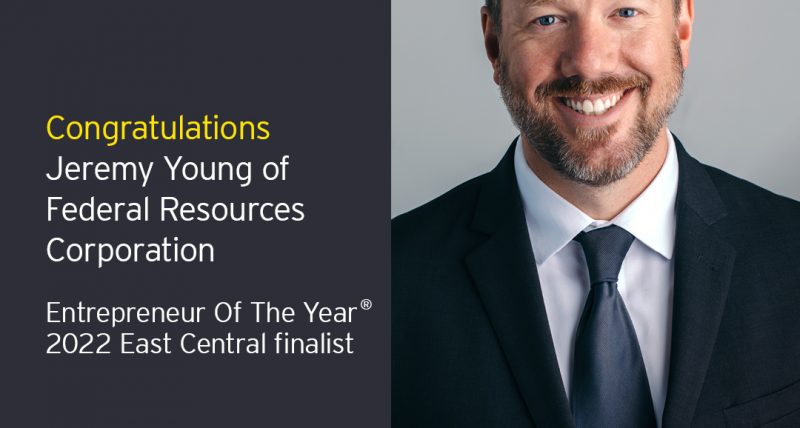